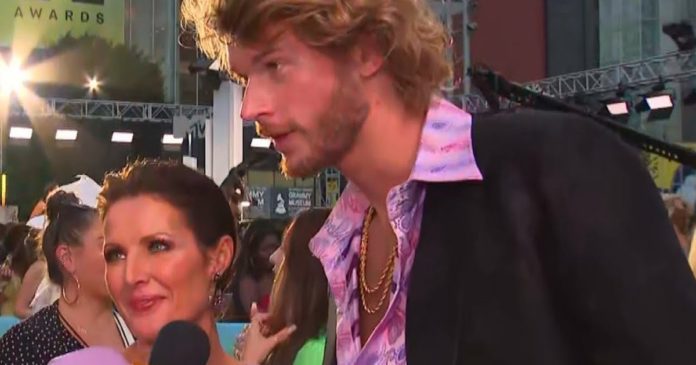 Gravy, 26, and Easterling, 42, don’t seem bothered by their age difference. In fact, it’s on-brand for Gravy, who released an album called Snow Cougar in 2018 and has been clear about his intentions to date older women over the years. He and Sheri shared a kiss in the middle of an interview at the VMAs, and posed for photos in matching lavender outfits.

Gravy himself confirmed that he and Easterling are dating. Easterling recently separated from her husband, Monty Lopez, who was accused of cheating on her with a younger woman back in July. According to a report from Page Six, Lopez, 46, was caught in a five-month affair with Renée Ash, 25.

Lopez weighed in on the relationship between his ex and Yung Gravy with an emphatic shirtless Instagram story on Aug. 28. “Unbothered!” he said. “Thank you @yungravy for taking the leftovers! I would rather spend time with my daughter and 2 grandkids that Sheri Nicole made me abandon as a child in order to be with her! Never let a woman make you choose between her and or your blood child. Easterling has not publicly responded to this development.

Addison herself has not said much about the situation, and hasn’t responded to the news of Gravy and Easterling’s relationship; however, the TikTok star unfollowed both of her parents on social media earlier this month. Rae provided no public reason why (nor does she owe it to anyone).

This is just the latest news between Yung Gravy and the Easterling family. Gravy and Easterling had been exchanging flirtatious messages on social media, and according to the Independent, they FaceTimed before meeting up in real life. Gravy and Lopez previously feuded, with Lopez challenging Gravy to a boxing match. In a TikTok, Gravy declined, saying, “You’ve got one of the most successful daughters in the world and you decide to act half her age to try to get some attention while embarrassing your whole family.”

Meanwhile, Gravy is not afraid to share his interest in Addison’s mom. “She’s like a Southern belle and I’m a Northern boy so it felt really cute and wholesome,” he said on the VMAs red carpet. He said he’s “into MILFs, and she’s kinda the queen of MILFs.”

Despite their appearance together at the VMAs, a lot of questions remain unanswered. There’s no telling what will come of this family feud and an age gap teetering on two decades. Is this just a celebrity splash, or a romance meant to last?

What Are The Different Types Of Learning?

Why Nannying is the Best College Summer Job

How to Know If You Qualify for a Physician Mortgage Loan

Tips to Prepare Kids for College