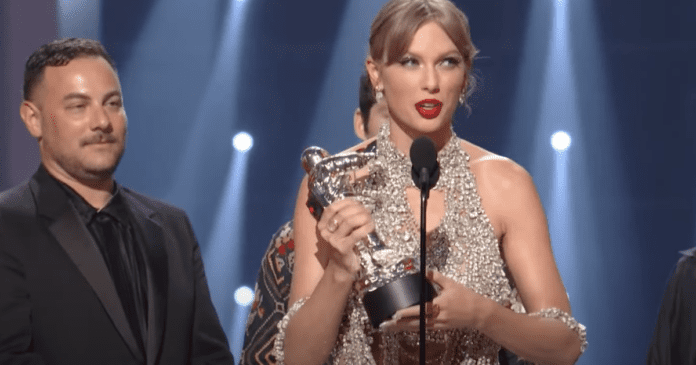 Sporting her classic red lip and a sheer Oscar de la Renta crystal mini dress, Taylor Swift accepted the MTV VMAs Video of the Year award for “All Too Well: The Short Film.” In her speech, Swift revealed that her “brand new album,” Midnights, will come out on October 21. The audience could barely contain shrieks of excitement.

Swift hard launched her new album, which has 13 songs, on social media.

On Instagram, Swift followed up with a post about her new album, titled Midnights, which she calls “a collection of music written in the middle of the night.” In her post, Swift divulges that Midnights will have 13 tracks (Swift’s lucky number), each inspired by “sleepless nights” throughout her life.

The second slide of the post shows a disheveled Swift, head in her hand, in a dimly lit room. A three-paragraph message to fans describes the “terrors and sweet dreams” Swift has experienced during her sleepless nights, all of which influence the songs on her new album.

Swift’s Instagram also has a new story highlight named after her new album. The beginning slide is a short video of an alarm clock changing from 11:59 pm to midnight, and the subsequent posts show the pictures already included on Swift’s Instagram.

In nine hours, Swift’s post about her new album has racked up nearly six million likes from excited Swifties. Though Swift limited comments on her Instagram post, her Twitter replies are filled with frantic fans.

One Swiftie posted a side-by-side comparison of the Midnights album cover, which depicts Swift glancing down at her lighter, and Megan Fox’s iconic lighter-licking moment when she played Jennifer Check in the 2009 horror film Jennifer’s Body, so it seems like fan theories are already abounding as to whether the album could be connected to the film and its themes.

Others politely (and some desperately) requested the track titles, which Swift has yet to disclose.

Swift’s VMAs album announcement might have been strategic timing.

Some Twitter users have taken to their own accounts to discuss the “iconic” timing of Swift’s album announcement. At the 2009 VMAs, Kanye West stormed the stage during Swift’s Best Female Video acceptance speech for “You Belong With Me” to advocate for Beyonce’s “Single Ladies (Put a Ring on It)” video. Beyonce’s video went on to win Video of the Year later that night, and she invited Swift up on stage with her to finish her interrupted speech.

Thirteen years later, Swift made her new album announcement while accepting her own Video of the Year Award.

can’t wait until the relase date? you can pre-order Midnights now.

Swift’s website, which can be found in her Instagram bio, allows fans to pre-order the vinyl, CD, cassette, and digital versions of the album. On Instagram, Swift invites her fans to “meet [her] at midnight” on October 21, alluding to the album’s dead-of-night vibes.

Student Loan Forgiveness in Ohio (And Other Repayment Options)

How to Borrow Student Loans for Certificate Programs

What I’ve Learned from the Men in My Life

How to Apply for Biden Student Loan Forgiveness