Picking a college major or a career remains the most crucial choice a student makes. It impacts their future career, the courses they take, and the degree they earn.

Students can’t know if they’ll thrive in a job they’ve never had.

Make sense. Students (or parents) can’t see into the future. If they could, picking a college major would be as easy as ordering a meal at your favorite restaurant.

As it stands, choosing a college major is usually a game of guesswork. Which begs the question, what if a student guesses wrong?

Sadly, that’s a future that’s much easier to predict. If a student picks a college major, then changes it, they stay in college longer and pay more for college fees, staying in college longer results in delayed graduation and parents paying much more.

Fortunately, there’s a simple solution to this problem. While parents and students can’t predict the future, they’re not without helpful tools.

The solution to this costly problem comes from a career aptitude test. With the proper aptitude test, students can see how easily they’ll master professional skills and tasks.

While it doesn’t confer clairvoyance on its user, it’s a powerful predictor nonetheless.

What is a Career Aptitude Test?

A career aptitude test is a tool that measures a student’s natural abilities (or aptitudes). The key word here is “natural” ability. Humans don’t learn aptitudes; they’re born with them.

An aptitude test doesn’t measure how well you know Spanish. Instead, it would predict how quickly you might learn a language. So it won’t measure your intelligence, but it will show which environments put your intellect to better use.

There’s no downside to having this kind of self-awareness. However, only an advanced aptitude test measures these abilities. And in the aptitude testing world, most assessments claiming to be aptitude tests fall short.

Read below to know which of these fake aptitude tests to avoid.

An Aptitude Test Is NOT A Personality Test

If you google the words “best aptitude test for high school students,” you’ll probably get something like this: 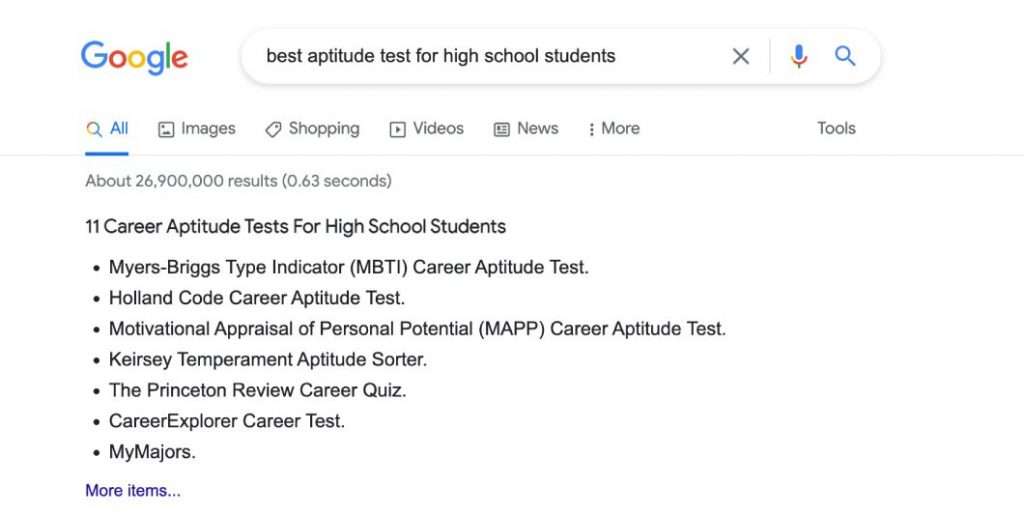 The top result was an article that recommends 11 career aptitude tests. Here’s the kicker… NONE of these suggestions are aptitude tests; they’re personality tests!

In the aptitude testing world, we have a name for these misleading promotions (see below): 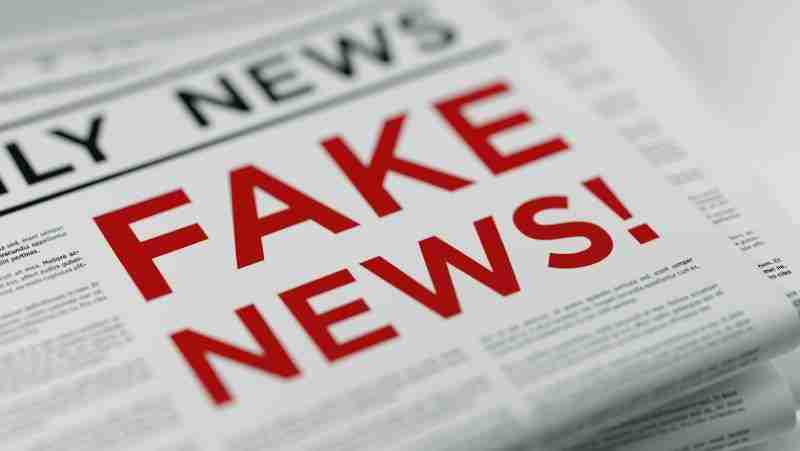 That’s right, all of these are scammy aptitude tests.

Please remember this: a career personality test is not a career aptitude. They are not the same.

Tragically, the internet is rife with fake aptitude tests.

I have nothing against personality tests. I’ve taken most of them, worked with consultants and therapists who use them, and found plenty of them insightful. But personality tests measure personalities or social behaviors, not career aptitudes.

Usually, personality tests use questionnaires or surveys to measure their data. However, questionnaires can only measure preferences and opinions, not aptitudes. Actual aptitude tests use problem-solving work samples similar to an IQ test. Thus, the measuring capabilities are much more robust.

Yet, the internet overflows with snake oil factoids masquerading as complex data. Unfortunately, searching for aptitude testing on the internet is no exception, as tons of faux aptitude tests often rank the highest on google searches.

Keep reading to know which fake aptitude tests to avoid. 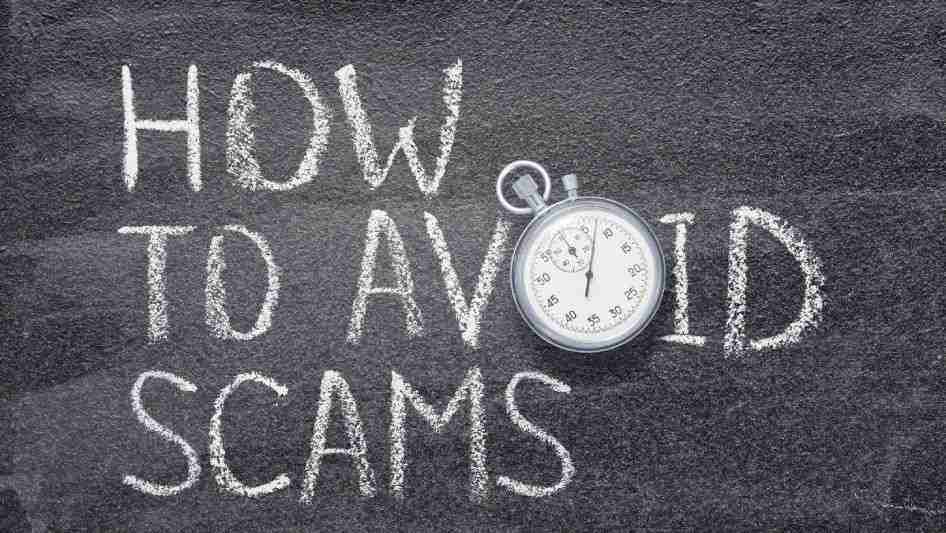 The personality tests below aren’t aptitude tests, despite what some websites claim. High school students should only take them if they’re interested in measuring their personality traits, not their aptitudes. However, you can remove most of them entirely from the career planning process.

The Meyers-Briggs is the grandfather of personality tests and by far the most popular. In fact, there’s a good chance you’ve taken it before. The premise of the assessment measures human behavior on four spectrums: introversion vs. extroversion, sensing vs. intuition, perception vs. judging, and thinking vs. feeling.

While the test provides insightful information, it’s come under much criticism over the past decade, to the point that it’s often called pseudo-science at best. Regardless of how valid the personality test is, it’s a personality test, not an aptitude test. So, students shouldn’t take it to chart the course of their careers.

The enneagram claims to measure both personality traits and values, as well as character strengths and flaws. The personality quiz gained much of its popularity among leaders in Christian circles, but it trickled its way into quiz business leader conversations as well. To my knowledge, there has been no scientific validation of the assessment. However, whether it has or gets validated, it’s not an aptitude test and should not be used in reliable career planning.

Out of all the misleading aptitude tests out there, this is one the most useful. The Strong Interest Inventory measures precisely what it says it does: interests. In career planning, interests serve as fuel in a profession. If a student has a genuine interest in an activity, they’re more likely to gain energy and fulfillment from it.

The Strong Interest Inventory uses a survey that takes 5 minutes to complete and separates your interests into six categories: conventional, artistic, enterprising, realistic, and investigative. It’s a great interest profiler, and it’s free.

Yet, it has one massive limitation: it’s still not an aptitude test. Aptitudes typically stay the same throughout our lives. Our interests change, sometimes overnight or week by week. So, while it’s an excellent assessment, it shouldn’t be used by itself for career planning. However, it does work well when used with an aptitude test.

You know which “aptitude tests” to avoid; now, learn which ones are reliable.

The Highlands Ability Battery (HAB) is known as “the golden standard of aptitude assessment.” And it’s no wonder it’s so highly regarded. The HAB measures everything an aptitude test should measure. Among other aptitudes, it measures reasoning ability, learning aptitudes, foreign language ability, and administrative talents.

The HAB has three benefits going for it.

Additionally, the HAB doesn’t require students to take the assessment in one sitting. Since the aptitude test is completed on a personal computer, students can take the test in multiple sittings. My only criticism is that it doesn’t offer a hand-eye coordination assessment. However, that aptitude is quickly becoming obsolete as machines replace professions requiring it.

The main criticism I have with it is that the institute’s aptitude testing services are centered around research, not helping students pick a college major or career. Additionally, its price is much higher than the HAB. Finally, you have to drive to one of their research buildings to get the test administered to you. For families where I’m from (the Little Rock, Arkansas area), that’s a 4-5 hour drive to Dallas, which means an entire weekend of travel.

Thus, my main criticism of the Johnson O’Connor aptitude tests is as follows:

What’s the Best Aptitude Test for a High School Student?

The HAB is the most affordable aptitude test and can be taken remotely by students.

Finally, the HAB uses the exact foundational science as the Johnson O’Connor test. It just makes it more accessible to students and families and uses integrative career data to make career planning easier.

Conclusion: Benefits of Taking an Aptitude Test in High School

By doing so, your student will discover their strengths and match them to careers. They’ll dodge the fake aptitude testing services and use reliable, data-driven science to pick their college major.

What Is a Good SAT® Test Score?

Where Can I Take An Aptitude Test?

What You Need to Know

When Do College Acceptance Letters Arrive for Regular Decision? For Early Decision or Early...