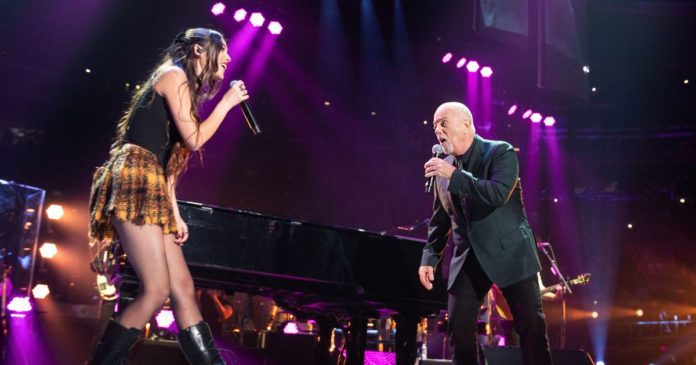 Sorry, Harry Styles — Madison Square Garden might be your house for 15 nights, but last night, it was Olivia Rodrigo’s and Billy Joel’s house.

On Wednesday night, Olivia surprised fans at Billy’s Madison Square Garden concert in New York City. Billy announced Olivia while her song “deja vu” twinkled in the background, saying, “I’m going to bring up another young musician. This is a very talented singer-songwriter [and] a triple Grammy winner.” He continued, “I like her music and so do my kids. Please say hello to Olivia Rodrigo!”

The crowd screamed in excitement as Olivia came out onstage, sporting a black corset top, a plaid yellow skirt, and black leather combat boots. The 19-year-old singer thanked Billy for inviting her to his show, saying she’s “such a huge fan.”

Olivia then performed her hit song “deja vu” with Billy on the keys. The song, which went viral last year in 2021 when Olivia released her album SOUR, references Billy in several lines, being “I’ll bet that she knows Billy Joel / ‘Cause you played her ‘Uptown Girl’” and “Play her piano but she doesn’t know / That I was the one who taught you Billy Joel.” As she sang the lines, she pointed and gestured at a smiling Billy.

The duo then sang Billy’s iconic 1983 song “Uptown Girl,” which Olivia references in “deja vu.” As the two sang and jammed out together, Olivia smiled and danced around onstage.

On her Instagram Story, Olivia fangirled over the experience, writing, “I SANG WITH BILLY JOEL AT MADISON SQUARE GARDEN TODAY ARE U KIDDING.” In a selfie with the singer, Olivia wrote, “biggest honor ever still crying thank u Billy!!!!!!! 💘❤️🎸🤠💘🥰”

Olivia and Billy’s duo performance at his Madison Square Garden concert certainly isn’t the first time older, well-seasoned musicians have mentored and collaborated with younger singer-songwriters. Harry and Shania Twain performed together at Coachella 2022, and Harry famously sang and performed “Landslide” with Stevie Nicks in 2020. Since the pair met in 2015, the Fleetwood Mac star has become a friend and mentor for Harry, and she has even endearingly called him “the son [she] never had.”

More recently, Elton John and Dua Lipa collaborated on the song “Cold Heart” and have performed together on numerous occasions. The pair sang Elton’s hit classic “Bennie and the Jets” at an Oscars pre-party special to raise money for Elton’s AIDS Foundation, and she has called working with Elton one of the biggest “pinch-me moments in [her] life.”

Not only does older singers promoting and collaborating with younger singers help keep older singers relevant and in the spotlight, but it also helps younger singers get their start and gain a valued mentor. And these shared performances are always so heartwarming to watch onscreen, garnering the attention of older and younger generations alike.

So my question is, who will the next older and younger singer-songwriter duo be? Harry and Mick Jagger? Lizzo and Bruce Springsteen (random, I know, but hear me out)? Sabrina Carpenter and Madonna? Only time will tell.

Did Early Humans Use To-Do Lists?

My Favorite Netflix Docuseries/Documentaries | Her Campus

What is Pre-Med? Requirements and Careers

What’s a Good SAT/ACT Score for the Ivy League? What’s the Lowest Score I...

They Love Us, They Love Us Not: How Misogynoir Oppresses Black Women (In the...