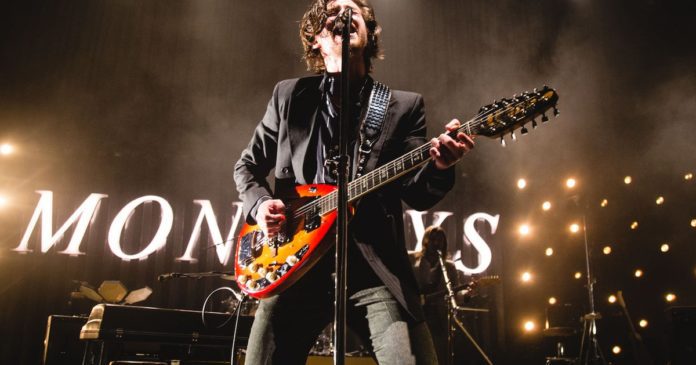 2013 Tumblr kids, after almost a decade, it  is finally your time to shine again — and you can thank Alex Turner for that. In an August 24 interview with the Big Issue, Turner announced that Arctic Monkeys’ new album, The Car, is coming soon.

The announcement comes four years after the release of the band’s previous album, Tranquility Base Hotel & Casino, in 2018. However, Arctic Monkeys might best be known among Gen Z for AM, their 2013 album that reigned over 2010s Tumblr and even influenced its aesthetics. Turner said in the interview that this album’s sound would only be better than their previous releases, elaborating, “I think we’ve got closer to a better version of a more dynamic overall sound with this record … The strings on this record come in and out of focus and that was a deliberate move and hopefully everything has its own space. There’s time the band comes to the front and then the strings come to the front.”

Of course, if you’re a fan of the band, you’re probably already wondering when The Car comes out and how to preorder the album, as well as the tracklist. Look no further — here’s everything you need to know about The Car.

What is the name of Arctic Monkeys’ new album?

As mentioned earlier, the album title is pretty minimalistic this time around: The Car doesn’t seem to give much away about what this album might sound like, though it is also the title of track six. Turner’s full interview with the Big Issue doesn’t drop until August 29, so until then, we won’t know if anything was said about choosing this song for the album title — though it will certainly be one to look out for.

The title does, however, correspond to the album cover that you can see on Arctic Monkeys’ website: The cover shows a single parked car in an industrial-looking rooftop parking lot. It’s certainly a shift from the cover for Tranquility Base Hotel & Casino, with its cardboard cutouts, and it seems like The Car might also feature a shift in sound. Where Tranquility Base Hotel & Casino was already a departure from the band’s sound on AM and their earlier releases, leaning more towards elements of psychedelic pop and jazz with an emphasis on intergalactic space themes, Turner said of The Car, “on this record, sci-fi is off the table. We are back to earth.”

Whether “back to earth” means back to the sound of AM remains to be seen, but Turner did add, “It does all feel like it’s connected to us 20 years ago in the garage when it was pure instinct.”

The release date is later this fall, but you can preorder the album now.

The Car officially drops on October 21, but if you just can’t wait to get your hands on it, you can pass the time by preordering the album through the band’s online store or even copping some merch. Of course, you can always stream the album on a platform of your choice, but if you really want to bring back the old-school vibes, Arctic Monkeys is offering The Car on vinyl in both black and gray, as well as on cassette and CD. (Oh, and P.S.: This The Car-themed cap looks like it could be a great trendy hat to spice up your back-to-school outfit.)

The tracklist for The CAR features 10 new songs.

According to Pitchfork, the tracklist for The Car is as follows:

Before you pick your favorite solely based on the title (we’ve all been there before), you might want to hear what has been said about these new songs so far. “There’d Better Be A Mirrorball” apparently sounds like a Bond villain theme song, according to the Big Issue, with Turner responding, “It’s a response I’ve had to other things we’ve composed, this idea of something sounding ‘cinematic.’ I never completely subscribe to it, but it’s louder this time.” “Hello You” also got a shoutout as a “belter.”

Until now, we’ll have to keep holding on until October 21 to hear the rest of the songs on the list. But with The Car and The 1975’s new album on the horizon, you might want to dig up the password to your old 2010s Tumblr account and start reblogging again.

The Best Small Colleges in the United States

Lessons I Have Learned by Being in an Interracial Relationship

What Is an AP Test Perfect Score? Do You Need One?

The Nopalera Moisturizing Bar Is A 2023 Must-Have

How to Write a Perfect “Why This College” Essay