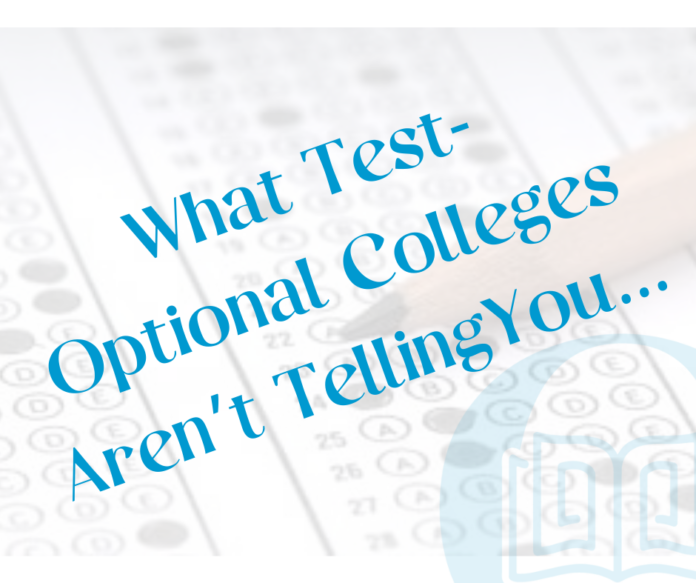 With that many schools claiming they no longer require standardized test scores, do students still need to study for the ACT or SAT? Or, has test-optional admissions made testing obsolete? It’s an honest question. And in this article, I’d like to give you an honest answer.

What are Test-Optional Colleges?

Take Harvard for example. On their admissions page, we read the following:

Students who do not submit standardized testing this coming year will not be disadvantaged in the application process. Their applications will be considered on the basis of what they have presented…

The keywords here are “will not be disadvantaged.” This allegedly means that a student who struggles with the ACT or SAT now has a never-before-seen advantage in the admissions process. Scoring competitively on standardized tests has long been challenging for students. If you take Harvard at its word, it sounds like your student has a better shot at getting into one of the US’s most elite schools now… if we take Harvard at its word.

Why Must Parents Understand Test-Optional Admissions?

Applying for college is an endless task of tedium, research, and decision-making. Thus, to plan for college successfully, parents and students MUST base their strategy and choices on accurate information.

Tragically though, there are mountains of misinformation surrounding test-optional colleges.

Basing your college choices on half-truths and anecdotal data sets students up to waste time and parents to waste money. So, here’s what you need to know…

Know This: Test-Optional Does Not Mean Test-Blind

Yet, test-blind admissions remain the only true way a student’s test scores are taken completely out of the admissions equation.

It’s very easy for a college to become test-optional. It just takes one announcement and a few tweaks on their website. After that, BAM! The university is now following the test-optional trend.

Trends, however, aren’t always truths. This doesn’t guarantee an admission team is remodeling their admissions approach for your student. It could. But we don’t know unless the college in question releases its admissions process, which many universities are reticent to do.

This begs the question then, if test-optional policies don’t reliably help students, why are so many colleges moving to test-optional admissions?

Who Does Test-Optional Benefit?

A recent, peer-reviewed study showed that test-optional colleges see brief spikes in the number of applying students. When a student applies to college, that student pays an application fee. The more students who apply, the more money that the university generates in application revenue. 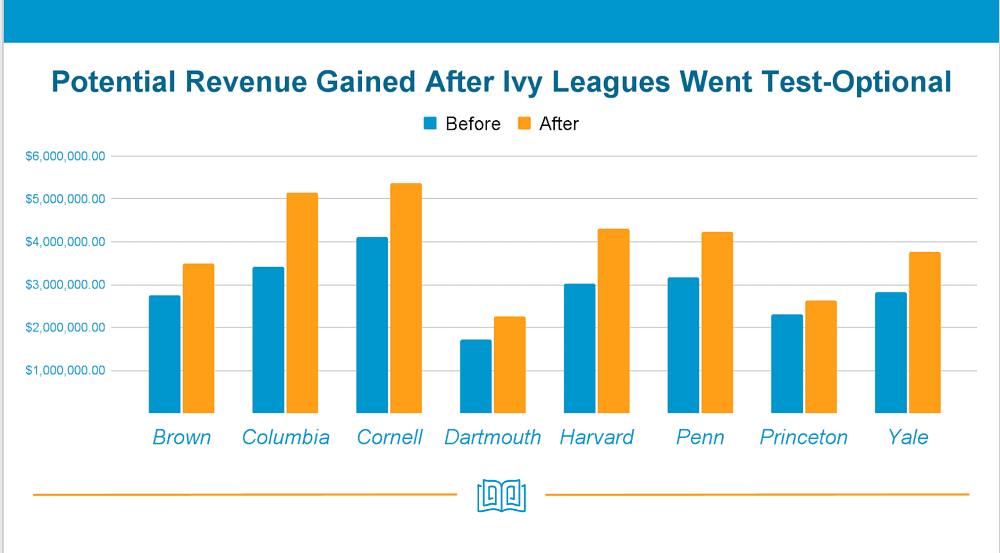 Moving to test-optional made Ivy League colleges millions of dollars from application fees. After sifting through the admissions from the last two years, we see a drastic increase in the number of students applying and the potential revenue gain from Ivy League schools since going test-optional.

After test-optional went viral, students were emboldened to apply to tougher schools. Just look at the data breakdown below. 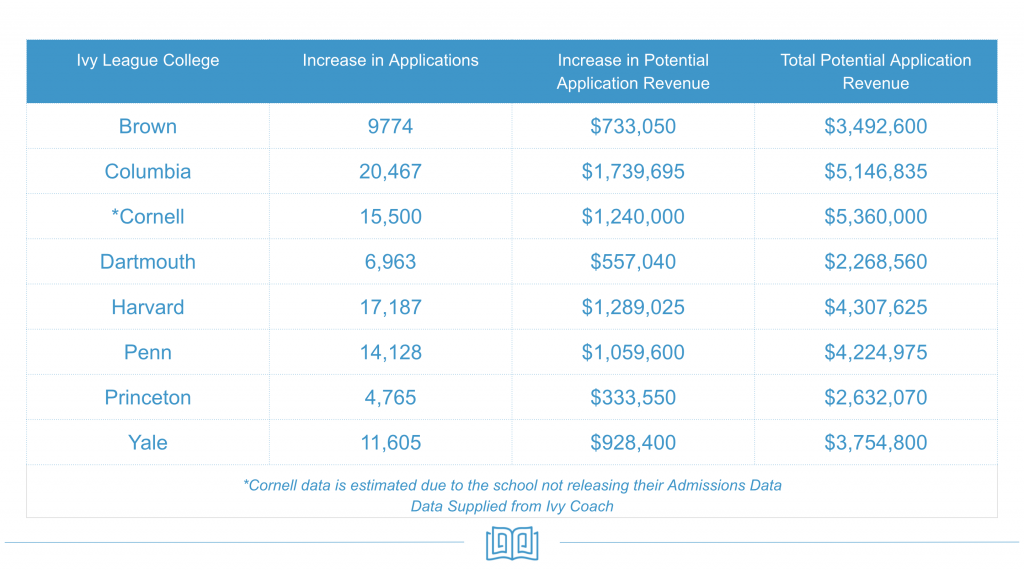 Columbia alone saw a 20,467 increase in applications this year. With Columbia’s application fee at $85.00, Columbia’s potential admission revenue this year was $5,146,835.00. That’s a $1.7 million increase from the previous year.

Thus, due to the brief admissions spike test-optional creates, elite test-optional colleges like Columbia gain a larger pool of applicants and an increase in application revenue.

It’s no secret that high standardized tests scores correlate with students from high-income families. So, when a college announces they’re becoming test-optional, they give the impression that their admissions process is friendlier for students in low-income families.

One former Ivy League admissions officer put it this way: “Test-optional policies are self-serving. The university gets bragging rights; a test-optional policy helps them appear considerate to applicants’ various socioeconomic levels… But this appearance doesn’t translate into a meaningful change to admissions.” 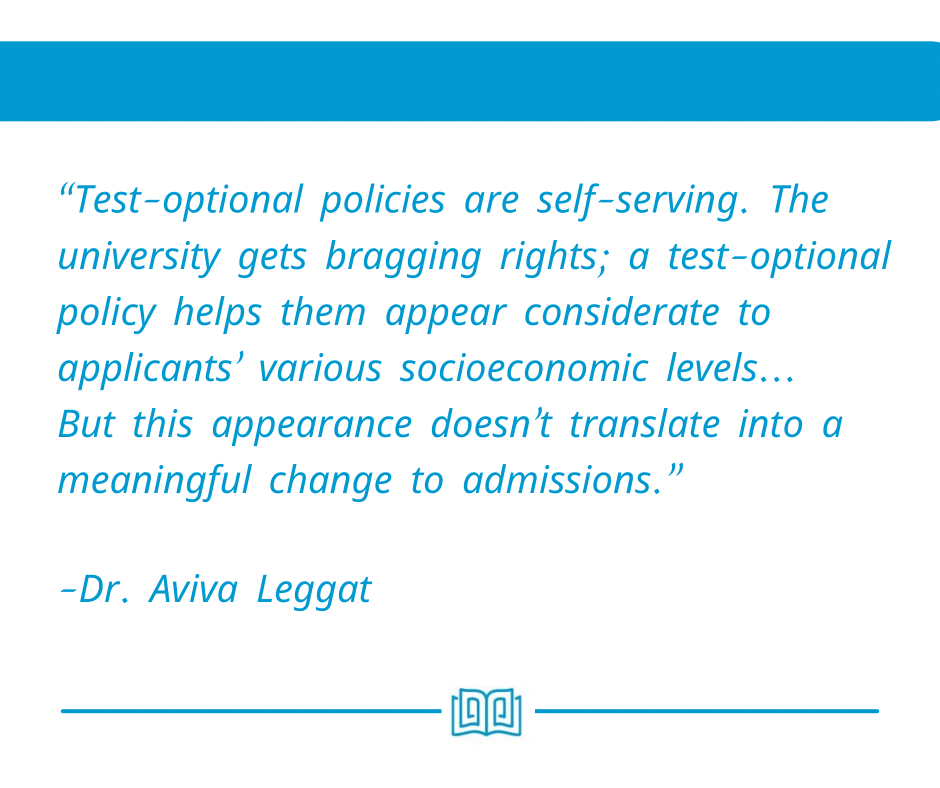 Tragically, the hype surrounding test-optional signals a change in college’s advertisement, not admissions. The policy helps test-optional colleges appear more accessible, inclusive, and open. In the case of elite colleges, test-optional enhances a college’s PR far more than it helps students get admitted.

Do Students Still Need to Prepare for the ACT and SAT?

For better or worse, yes. Test scores still matter. If a student wants to go to a competitive school, they’ll need to study and do well on standardized tests.

There is one exception. If you apply to a test-blind college, your test scores will not be considered. Period. However, securing scholarships at these institutions might be a different story.

For example, Northern Kentucky University (NKU) is a test-blind college. To get admitted, students aren’t even allowed to submit test scores. Yet, to qualify for NKU’s Presidential Scholarships, an applying student must submit their ACT scores.

Students would be wise to prepare for the ACT or SAT. This will increase their chances to get admitted and earn scholarships.

There may come a time when test-optional really means what it says. In the meantime, don’t allow the hype of the test-optional trend to trick you. At least for now, test scores still matter.

To learn how to raise your student’s test scores, schedule a free strategy session with us. To see what ACT and SAT materials our tutors use, check out our resource page. If you have any questions about test-optional admissions, leave your questions in the comments below. 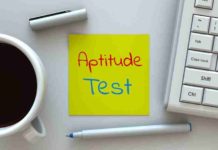 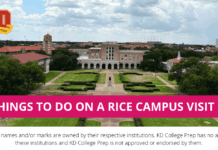 My Favorite Netflix Docuseries/Documentaries | Her Campus

Find Scholarships for College With These 10 Search Tools