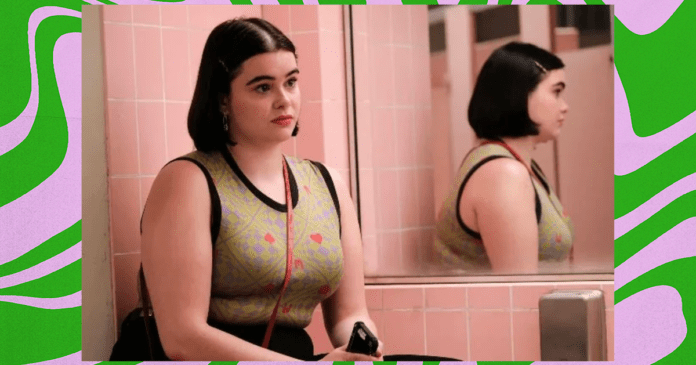 For the past three years, Barbie Ferreira has graced our screens as the beloved Kat Hernandez on the HBO show, Euphoria. But on her Instagram story on Wednesday, Ferreira bid a “very teary eyed goodbye” to her character and the show.

On Euphoria, Ferreira played Kat Hernandez: a high schooler who, eventually, learns to embrace her sexuality as a plus-sized woman. This body-positive role launched Ferreira into stardom, and Kat became one of the most beloved characters of Euphoria’s first season.

Along with fan art created by her co-star, Hunter Schaffer (who sparked controversy this week over her alleged stance on trans healthcare), the 25-year old actress shared a heartfelt message to her fans via Instagram stories.

“i hope many of you could see yourself in her like i did and that she brought you joy to see her journey into the character she is today,” Ferreira said. “i put all my care and love into her and i hope you guys could feel it. love you katherine hernandez ❤️🐱”

After being the subject of one of the main plotlines in season one, fans were keen to point out how the fan-favorite character’s scenes in season two were minimal in comparison to the previous one, and how Kat’s character suddenly went from the body-positive baddie we knew and loved, to a faded (and like, emotionally manipulative, TBH) background character. Kat lacked growth, depth, and basically added nothing to the chaotic and drama-filled second season. This characterization was definitely different from season 1, and Kat went from fan favorite to forgotten.

However, for avid Euphoria fans, Ferreira’s departure from the series doesn’t come as a total surprise. Earlier this year, rumors of potential issues between the creator of the show, Sam Levinson, and Ferreira were speculated to impact Kat’s screen time in the second season. The actress also didn’t attend the season 2 premiere in January, which only caused more speculation of a falling-out between herself and Levinson.

Along with her personal issues with the creator, there have also been reports of the Euphoria set being unsafe for the crew, and the toxicity of the workplace affecting the actors on set. Some of the stars have also made comments on how the amount of nudity displayed onscreen has made them question things, especially the double standard that women face in the film and television industry today.

However, it doesn’t seem like Ferreira will be leaving out screens anytime soon (thankfully!). Since her start on the hit drama, Ferreira has gone on to make her film debut in Unpregnant alongside actress Haley Lu Richardson in 2020 and also has a minor role in Jordan Peele’s new sci-fi thriller, NOPE.

It is still unclear as to whether Ferreira will make an appearance in season 3 of Euphoria, as rumors of the show’s production began in early 2022. However, one thing is clear: she will be missed. Kitten Queen forever!

What is an MBA and What Can it Do for Your Career?

One Size Does Not Fit All

Hooray! SoFi Plus is Now Available to All Eligible Members

8 Things That Have Been Keeping Me Afloat Lately

Going Back to School: What Happens to Your PSLF Payment History?

10 Ways to Stand Out to Colleges Besides Your GPA

You Learn From Experience | Her Campus